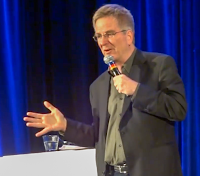 In the often ethically fluid industries of media production, hospitality, and drug policy, Rick Steves is a rare icon of authenticity in all three.

Now as Board Chair of NORML, prospects for overdue reform on a variety of national and international fronts are the most hopeful in decades. In fact, the Biden-Harris administration would be well served to open a NORML office inside the White House. Rick's cannabis informed approach to foreign policy may be our best bet for finally bringing respect into global sync. 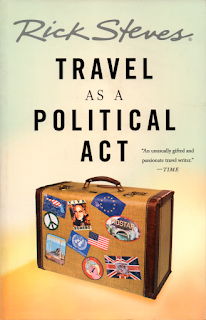 Excerpt from "Travel as a Political Act":
As an idealistic young adult, I struggled with what I'd do with my one life. I wanted to work hard at something worthwhile and contribute to society.  I wondered if it was really noble to teach wealthy Americans to travel. As a child, my earliest image of "travel" was of rich Americans on fancy white cruise ships in the Caribbean, throwing coins off the deck so they could photograph what they called the "little dark kids" jumping in after them. They'd take these photos home as souvenirs of their relative affluence. That was not the kind of travel I wanted to promote.

...since that first trip back in 1969, I've spent a third of my life overseas, living out of a backpack, talking to people who see things differently than me. It makes me a little bit of an odd duck.

...Travel has taught me the fun in having my cultural furniture rearranged and my ethnocentric self assuredness walloped. It has humbled me, enriched my life, and tuned me in to a rapidly changing world. And for that, I am thankful.

At Rick's side are First and Second Vice-Chairs, Evan Nison and Courtney Moran.
As a volunteer on the California Tax and Regulate Cannabis Act (Prop 19) in 2010, I got to experience Evan's organizing style first hand. It was an inspiring pleasure to see him work. Even then, as a college student, it was evident his vision far exceeded any personal ambition. Evan Nison sees the way to a better world and is realizing the path to take us there.
Ensuring that path also includes restoring planet Earth is Courtney Moran.  I met Courtney during the early days of cannabis legalization in Oregon. While the majority of others in the new industry were centered on ROI and marketing, Courtney remained focused on the crucial climate benefits of industrial hemp.

Her advocacy provided the insight I needed to deftly expose the deception behind the War on Drugs to others.  Industrial hemp is not a psychoactive drug.  But it was included as a Schedule One illegal drug (until 2018) along with cannabis simply for political/economic reasons.  The War on Drugs enabled agendas and enriched stakeholders. The story about guarding the public from harm was a blatant lie.
No leadership team may be better suited to this time than Courtney, Evan and Rick.

Momentum behind the recent waves of legalization has taken decades to build.

But many of the most complex challenges are just beginning to emerge. To anyone who has recognized the injustice of drug laws but hesitated to provide support for reform, this is the opportunity to get your values into retroactive alignment. Be generous with vocal and financial support. Talk openly about the role cannabis has played throughout your life.
Among my own boomer generation, the most common reason I've heard for being a closeted cannabis user has been fear of damaging a career or social status. Then take courage from Rick.  As a role model he has risked his livelihood, reputation and more.  Advocating for an internationally illegal substance while traveling the world takes a profound amount of trust in a greater good. I trust Rick and would follow him to the ends of the Earth.
There are many effective advocacy organizations to join but for those taking the first step as a hesitant boomer, the National Organization for the Reform of Marijuana Laws is reassuring.
It's OK.  It's NORML.

Posted by Cynthia Gaffney at 12:03 PM
Email ThisBlogThis!Share to TwitterShare to FacebookShare to Pinterest

Our Budding Boomers documentary is ready just in time for 4/20.

Posted by Cynthia Gaffney at 4:06 PM
Email ThisBlogThis!Share to TwitterShare to FacebookShare to Pinterest

The phrase “cannabis farmer” doesn't suggest thoughts of Baby Boomers but change is in the wind!

Cindy and Larry, both in their sixties, are prime examples of a growing trend in cannabis farming. A decade ago, they probably would have laughed at the suggestion of personally growing cannabis. Now they are cultivating their own bud.

About ten years ago, Cindy found herself struggling with debilitating health issues that were only exacerbated by prescription drugs. Then a relative gave her a small bit of cannabis to try. Within days, many of her symptoms were alleviated to a point that even her partner, Larry, noticed the difference. From that point forward, she began relying on cannabis as a more healthful and effective alternative to prescription drugs.

Both Cindy and Larry had used cannabis for fun in their younger days but employer drug testing forced them to forego it through most of their adult lives. Now, in addition to discovering cannabis as a medicine and taking all steps necessary to be compliant with Oregon's Medical Marijuana laws, they recognize the injustice of Federal prohibition. In their retirement years, Cindy and Larry have become vocal political activists.

After Cindy got her medical card, she spent a few years getting cannabis from a medical grower. But Larry, a native Oregonian, was raised in a farming family so it wasn't long before they began experimenting with raising their own crop.

Now they've been full fledged medical growers for five years on a former vegetable farm near Salem and their lives have been transformed in profoundly positive ways. It's as though, in their sixties, they've been transported back to the Sixties, embracing the mission of radical transformation that filled that era with hope.

We met Cindy and Larry at the 2017 Oregon legislative sessions, and they welcomed our proposal to document the evolution of their production cycle this year. The work itself has already been a remarkable revelation. In contrast to what the slang term "Weed" suggests, growing great organic cannabis is not easy!

Between the labor intensive planting and harvesting events, there are at least five months of constant maintenance. Cindy spends an average of six hours each day, tending to the needs of individual plants and the crop as a whole. With Larry's background in traditional farming and Cindy's dedication to organic methods, they have experimented with various production improvements every year and expect this 2017 harvest - the "Eclipse Crop" - to be the best yet.

In addition to developing organic compost fertilizers and insect repellents onsite, Cindy is refining her own cannabis strain called "Creative Lady" which addresses the specific needs of some cannabis patients.

The delight and satisfaction she gets from caring for the plant is obvious to all. It is her gift to a community that restored the quality of her own life.

Posted by Cynthia Gaffney at 10:31 AM
Email ThisBlogThis!Share to TwitterShare to FacebookShare to Pinterest

An Easy Introduction to Edibles

For those who are Cannabis Edible curious, this is a simple, inexpensive way to try ingesting the herb. The original recipe is Delicious Stoner Tea on the Bit Coin Seed Store website.

Here is a step-by-step version of the recipe with a few pointers.

Process:
1: Grind up 0.5 grams of your favorite (or available!) cannabis flowers and set aside.

4: Add the spices and 0.5 g of cannabis to the boiling water and oil.

5: Allow the mixture to boil for a few minutes to blend the ingredients. Stir to make sure nothing sticks to the side of the pan.

6: Reduce heat to a simmering boil for 30-40 minutes. Note ~ the longer it simmers, the stronger the mixture will be.


7: After simmering 30-40 minutes, strain the mixture into a cup or other receptacle.

8: Drink, wait and enjoy! Note ~ First timers should drink only half of the mixture to start.

An End Note:
The reason for heating cannabis in a fat (or alcohol) is to release and activate the Tetrahydrocannabinol (THC) which does not become psychoactive in water alone.

Also, the more specific information you have about the cannabis used, the better able you will be to begin discovering your own dosage levels and cannabis strain preferences.  Thanks to hard won legalization efforts, precise measures of THC, CBD and other cannabis elements are now being clearly shown on product labels.  ED will cover more about the advantages (and requirements) of commercial cannabis labeling in later posts.

So experiment, take notes and have fun! See the tea as it simmers in this video from our Cannabis Test Kitchen.